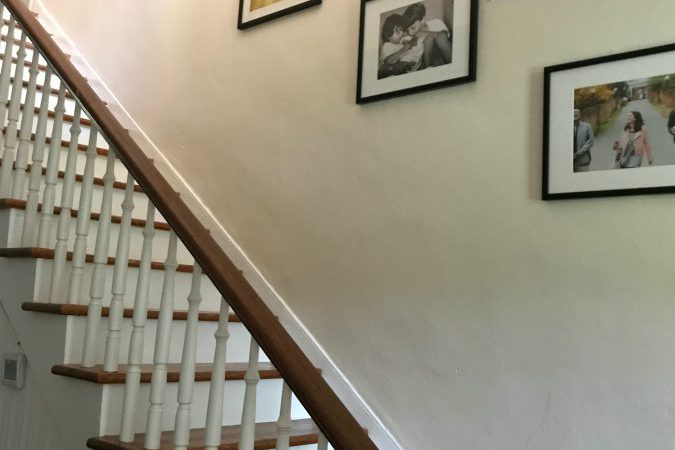 ONE OF THE FIRST THINGS THE REALTOR TOLD US

When we put the house on the market ….

sidebar – (if you are just tuning in – the house was on the market for 18 months, we have taken it off and are living and loving it and making some improvements (HVAC, windows) and will address the issue after my youngest son graduates high school next Spring)

We were advised to streamline, remove clutter and PUT OUT OF SIGHT  a lot of the family photos. So we did. I swept the house of all semblance of us, cleaned her up and filled dozens of trash bags with trips to Goodwill. I used it as an opportunity to clean out closets and the attic and the rooms of all the LIFE that accumulates while you are LIVING.

We also removed any favorite light fixtures, pendants  and chandeliers – pieces we did not want to CONVEY (that’s when the buyer gets to keep things in the house)   and replaced them with more generic fixtures.

It was kind of nice, and I have to say, I rather enjoyed my clutter free home. We were surrounded by JUST what we needed. It was so much easier to keep clean and tidy. And for a while anyway – I enjoyed my ding-free, freshly painted walls and I did not even miss the photos.

Little did we know that Spring day in 2016, that the house would sit on the market for a year an 1/2.

AFTER 18 MONTHS –  we took the house off the market.

THEN – I was approached about having the house photographed for a magazine.

In the process of RECLAIMING my home I painted our Living Room BACK to Pink which I had loved and made it feel so ME and MINE. I went to our storage unit  which we rented in the Spring of 2016  – and much to my dismay found all of my Winter clothes that I had thought I would just be unpacking into a new house that Fall – and the special Light fixtures and the PHOTOS!!!!!!

I made a compromise with myself – I knew we did no longer needed the “history of us photos and school years and every favorite from day one” photos all over the house. I instead chose my MOST FAVORITE cherished shots, the photos I did not even need to see to remember – the ones I want to buried with. I had them each enlarged to 11 x 14 (on Shutterfly) and I bought simple frames  with mats at Target.

The DAY before the photo shoot – I finally put the photos going up the staircase. It was actually not hard to get them STRAIGHT –  I discovered that the lamp in the downstairs hallway cast a perfect shadow along the stair railing – giving me a LINE to follow!!! love when that happens!

HERE ARE THE PHOTOS AND WHY THEY ARE SPECIAL:

My Mom (That is her arm bracing Baby Cooper) came to visit close to my due date with Cooper. She had intended to be there “after” the baby came, Tate and Phoebe were born  Two and Three weeks early respectively, but #3, baby Cooper had other plans. He arrived 3 hours before his due date. My Mom stayed with the big brother and big sister while Daddy Damon and I had a day with our little yummy 8 lb 6 oz. chubby-cheeked, delicious  new baby. Then, the day after Cooper was born – they all came to meet their baby brother for the first time. They had their “I’m a Big Brother and I’m a Big Sister” t-shirts on ….and the sweetness …oh my goodness the sweetness….it makes me cry even as I write this. yes, it was chaotic and I am sure someone lost it or had to go potty and needed to play with the controls on the bed and make it go up and down 100 times, BUT this photo captures the sweetness of the 3 of them, Phoebe’s little fingers and her adorable determined face as she replaces Coopers pacifier  and Tate’s pure tickled joy at this BABY BROTHER … and that is all that matters.

Cooper was born of September 11, 2000. The last September 11 that was just a beautiful early Fall day. ONE YEAR LATER, We woke up on his first birthday, a beautiful Tuesday morning, excited for the big FIRST BIRTHDAY. I gave him a little rocker I had painted with trucks and we got Daddy and the older two off to work and Pre-school.  We were about to go run our errands and go pick out a First Birthday cake when –  I got the call from my best friend Trish, she way crying… – “Turn on the TV!!!!” … I did. After that….it was all a big blur of insanity, racing to pick up the other two from school, the fear, the absolute disbelief and sadness  and tears and awful and well – you all now the rest.

Later that week, while the kids knew nothing of what had happened, they knew that “America had been hurt” and asked if they could put on their Old navy July 4 t-shirts. I took them out to the front porch and took this photo.

This is a print of a painting that my husband got me before I started painting. We had seen it at a craft fair and he secretly bought it and saved it for Mothers day. It is like the artist knew us and painted us. The three kids. The baby we lost. The animals..everywhere. And Damon and I – way back – in the Blue Boat – steering the ship – often without a compass . Navigating on our wits and a nickel.

On the day I went to put the photos up – I could not find the 5th photo – so I thought this would be the perfect piece to balance to pictures.

This photo serves to remind me of all the literally HUNDREDS of “outtakes” , the attempted Christmas card shots – every year – SESSIONS which dissolved into chaos at best – tears at worst – usually mine – . I look at this photo NOW, an out-take,  and see nothing but perfection. MY GOOFY, NUTTY BUDDIES. I NOW UNDERSTAND  what my Mom used to say:

“Years from now – even the bad photos will make you smile.”

There is no perfect PHOTO. Yes, sometimes you can get all the kids looking in the same direction – in clean clothes and smiling – but that is all THAT is. Just a PHOTO of THAT moment. In a series of infinite moments that are ALL WONDERFUL. ALL ARE PRECIOUS.

This photo WAS a Christmas Card. Christmas 2015. It was the day before Thanksgiving and I  had taken the kids to UVA campus to get some professional photos taken as a Christmas gift to my husband. We took dozens of beautiful shots all over the grounds , in the shadow of the Rotunda – on the “LAWN” …and yet, it was THIS PHOTO, taken as the we were all LEAVING, , the 3 of them laughing, they had not been together since August and they just looked so happy. They WERE so happy – and I caught this on my phone and my dear  friend Sarah, the photographer and a Mom…CAUGHT IT. I cherish this photo. It reminds me that despite my dread and sadness at the anticipation of the first chick flying the nest – that only the geography has changed. We are still a family.

WE WILL ALWAYS BE A FAMILY.

THANK YOU FOR LETTING ME SHARE THESE SPECIAL PHOTOS WITH YOU.

We all have these “moments” , which captured on film or digitally or in memory..sit frozen in time, they help us orient to our life, our history…they bring us home when we feel lost or unmoored. They  belong to US- they are all ours, their meaning lost to anyone else, but that is what makes them so incredibly special. Be careful – in this day of “sharing” – keep some things precious. Just for you. It matters.

…and news flash – IF and WHEN our house ever goes back on the market, these photos, and the ones I have carefully placed on dressers and bedside table – ARE GOING NO WHERE!!!!!!

1 thought on “SPECIAL FAMILY PHOTOS AND REVIVING THE STAIRCASE / ENTRYWAY”