My Dear friend Suzanne is a working actress who lives in New York City. She recently did a TWO WEEK stint on Broadway, playing “Gina Klein” – Carole King’s Mother-  in BEAUTIFUL – The Carole King Musical! She will soon leave for the National Tour of the same show in the same role!! Congrats Suzanne!!!

Suzanne and I go way back to graduate school in Theatre together at the ASOLO CONSERVATORY in Sarasota, Florida. 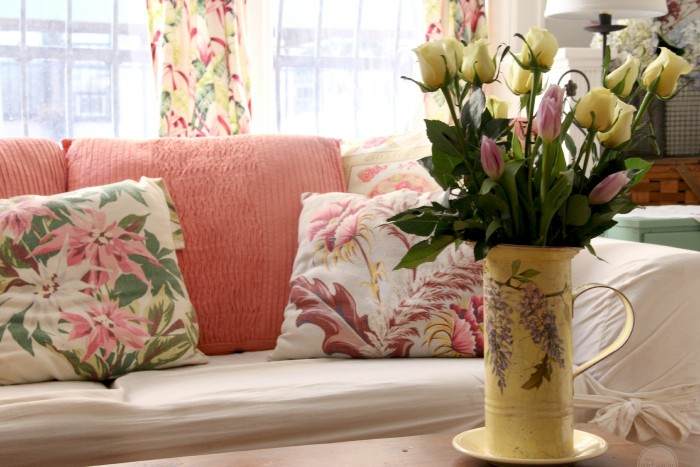 Years and time have passed and our lives have taken dramatically different DIRECTIONS and paths but while our lives are sometimes polar opposites – our friendship is a constant….that never changes.

A few years ago, Suzanne and I found ourselves in a similar predicament – Both of us renovating Bathrooms and Kitchens in our very old homes. My Old Country House was built in 1880 and Suzanne  lives  in an 1884 Queen Anne “House” on the Upper West Side of Manhattan.  Her home was built by an architect for his family. For a reason unknown to Suzanne, it was moved a few blocks 9 years later to its current location .The Co-op has 4 apartments and I love Suzanne’s the most because she has a garden…which in New York City is like having 5 acres of yard someplace else.

2 YEARS AGO – Suzanne’s apartment underwent a total renovation. Here is her story:

“The Renovation happened as a result of Structural Damage in the basement, right below my kitchen.  One section of the kitchen had slowly been sinking, and when we pulled the ceiling down in the basement, we discover five wooden Structure Beams had broken – old age, water damage, termites over the years had compromised the beams.  The only way they could get the steel beams into the basement – was through MY kitchen, and thus began the Renovation.

“They gutted my Kitchen and Bathroom, and I was only going to renovate those two rooms.”

“Of course, after everything was done, I knew I had to do the rest of the apartment, and if I didn’t do it right away, I would never do it.  The Contractor drew up a new contract for the Living Room and Bedroom, and a few weeks after the Kitchen was done, he moved on to the rest of the house.”

“A lot of things were saved from the old apartment – the original Tub, the original Pedestal Sink, the original Medicine Cabinet.  I kept the Parquet floors in the Living Room and Bedroom, and moved the Built-in Closet in the Bedroom more toward the front of the room.”

“The original Bathroom door was cut down and turned into a Barn Door, as were the French doors in the Living Room.  The Living room doors are painted the same color as my Mother’s front door in Alberta, Italy, where she was born.”

“And the best part of the Renovation is the Stove.  It is a 1935 Wedgwood Stove, and it was my Grandmother’s.  When we sold her house years ago, I said I wanted the Stove, and put it in storage, hoping that one day I would find a use for it.”

“I had it shipped out last year and delivered to The Stove Lady in Mt. Vernon, where it was cleaned, and when the Contractors were ready for it, it was installed.  It works like a dream.”

“It feels like my Mother and Grandmother are there cooking with me.”

“As I had said before, every inch of this apartment has Lesli’s influence, from the Farmhouse Sink to the Light Fixtures to the color on all the walls…….I don’t know what I would have done without her.

SO THERE YOU HAVE SUZANNE’S AMAZING NEW YORK CITY COTTAGE HOME!

11 thoughts on “MONDAY MAKEOVER – SUZANNES COTTAGE IN THE CITY”