TGIF everybody!!! I am super excited because in just a few hours I am going to hit the road and go see my baby girl for the night. I am picking her up at her dorm, taking her on a Target run, getting a manicure. And seeing a movie at the place where they bring you dinner !!!! I will be there less that 24 hours but it will be all Phoebe and me and I am so EXCITED!!!

i am also thrilled to introduce you to:

SWEET SADIE IS A 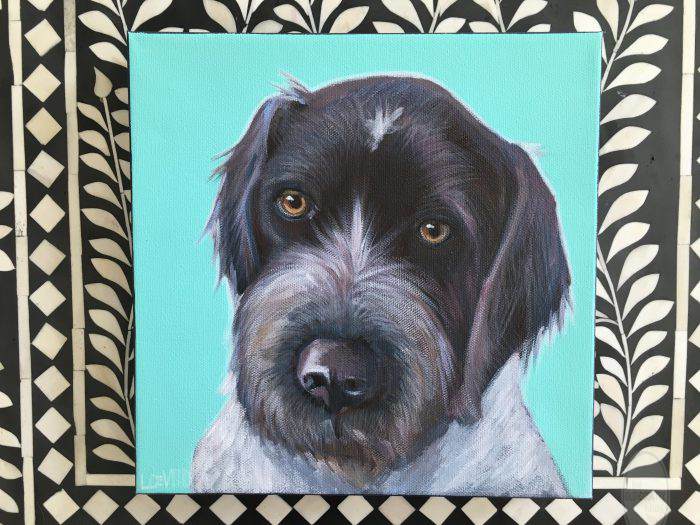 “Sadie is a 3 year old German Wire Haired Pointer, whom we adopted when we were living in Wilmington, North Carolina. She was bred to be a show dog, but because she was smaller than desired, she was unwanted. We had a serendipitous meeting when we happened to visit a dog show, and a few weeks later, she came home with us. Having lived in a kennel for the first year and a half of her life, it took her several weeks to come out of the corner, and a few months before she was comfortable letting us pet her. Today, she is the sweetest, most loving, and loyal dog you can imagine. She charms everyone with her beautiful eyes, but still takes a while to warm up to strangers. She spends her days lounging on our temperpedic mattress with her head on a pillow, and relishes her evening walks or visits to the dog park. She’s come a long way since her days in the dog kennel, but we are the ones whose lives truly have been enriched!” 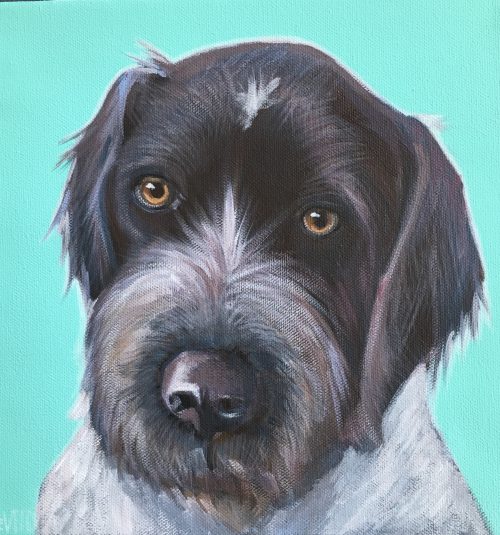 1.The German Wirehaired Pointer was developed in the late 19th and early 20th centuries to be a versatile hunting dog breed, a job at which he still excels today. He can hunt any game on any terrain and point and retrieve from land or water.

2. A facial beard gives him a distinctive expression, and a docked tail held horizontally quivers with excitement. Known as the Drahthaar in his homeland of Germany, the breed was developed to be an all around hunting companion, useful for hunting all types of game in all conditions.

3. Training him to compete in obedience, tracking, agility, rally, or other dog sports gives him a job, mental stimulation, and exercise.

4. Can be suspicious of strangers and aloof with all but his family
5.German hunters in search of a rugged dog who could hunt any kind of game on any terrain created the German Wirehaired Pointer in the late 1800s. In him they blended the best qualities of the Pointer, Poodle, and Foxhound to develop an all-purpose dog who could point and retrieve on land and in water, no matter what the weather or environment.

thanks for sharing Sadie with us!!! Stay tuned to see who drops in tomorrow.

Beginning March 1 – the Dog A Day will be presented daily on its OWN PAGE!!! The blog will go back to home and design posts and each day a new dog will be introduced on the special page!!!