Gray Day – My Old Country House
Skip to content
— old country house blog —
Today the weather was nothing short of Abyssmal.
Rainy. Water pouring in our leaky ceiling. Buckets. Literally.
The perfect day to stay in pjs and watch old movies, or even new ones.
Which is what we did.
Two children recovering from the flu and strep.
I spent the day with my daughter curled up next to me on the sofa
and researched kitchen cabinet whites and cabinet knobs and Grays.
Good Times…. 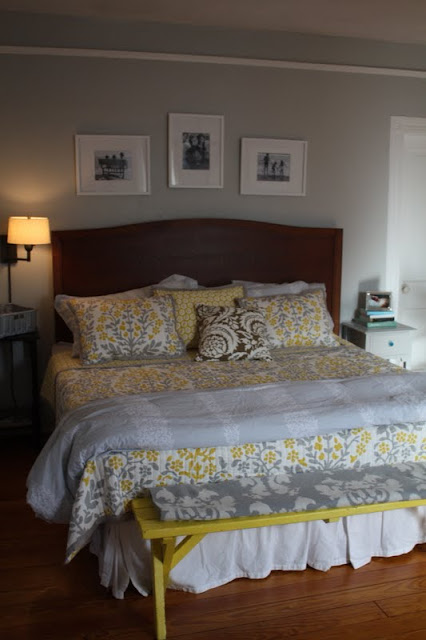 I love Gray days. Maybe it was the growing up in Florida and a Gray day being like a “season”, I don’t know…. but unless they come 10 in a row…I do not mind them.
And I LOVE GRAY rooms.
I  have loved grays for a few years.
Lo and behold, my beloved gray has become hot and trendy.
It was always beautiful, but apparently it is the “new neutral”.
who knew?
Our Bedroom is painted GRAY.
The color, if you must know, was arrived at under duress, after trying 6 different grays on our bedroom wall. One was too dark(Stonington Gray), one too light (Horizon), one too pink (Portland Gray) I did LOVE that one though, hubby did not,  Too Blue (Feather Gray) and too light blue (Winter Ice) and finally one I adore, but already used in the kids bath (Wickham Gray)  .
Some were samples I had,
so I could not tell you the proportions,
I can only tell you that I got frustrated and poured
whatever was left in all six cans in a 5 gallon bucket !!!
And what I ended up with was GORGEOUS!!!!
In case you ever want to try it here is the formula –
my buddy Nancy at
Benjamin Moore figured it out –
BERGMAN GRAY
Oy  0x 12.5000
BK   0x 18.000
MA  0x 1.000
There are two kinds of people. Pickers and…well, those that can leave well enough alone. I happen to be the former, I am most assuredly, a picker. Literally, metaphorically and absolutely, a picker. I pick zits, I pick boo-boos, I pick apart movies and relationships, I pick Elmer’s glue off my fingers, and last week, I picked at the wallpaper. And then I paid for it.

You might say I make work for myself.
The latest incident occured when I was RE-installing a light fixture.

It was one that I had installed before, actually there were a pair of them. The first time I installed  I, in my excited to see them up  haste, skipped steps…and like I said…I am paying for it.

Finally I had all the stars in alignment: the hardware, the fixture, the diet coke and the kids occupied and I got ready to put the light fixture back in.

As I readied myself to insert the toggle bolt, I had to peel a little wallpaper (the whole house is wallpapered – no lectures, we painted over it after the walls began to crumble in the first room we tried to remove it in)
It came off much easier than I had anticipated
and under the painted was was the most vibrant Ralph Lauren looking
giant rose pattern wallpaper
The HUGE roses looked lit from behind. I peeled back about 4 inches and kept trying to finish off the edges to blend them into the rest of the wall. Sheets about a foot long kept coming off, old nasty musty powdery dried wallpaper paste and disintegrating bottom layers of wallpaper, just came off under my fingers, they JUST KEPT COMING… and before I knew it and way before I put a mask on,
half the wall was down  the 1940’s.
I was cocky still, completely confident, and decided to make a clean break of it.
I peeled back the remainder of this layer to either edge of the wall, which is 17 feet long and 10 feet tall, and planned to prime and then repaint over my mistake.
I bought the primer and a new paint brush and got the tickle in my tummy to get started. On the way upstairs I grabbed my 9 am diet coke and set off to what I THOUGHT would be a one hour job, TOPS.Here is what I learned: Water based primer, has as a component, ammonia. Guess what else has ammonia as an ingredient? You guessed it, wallpaper remover! So as I lay the coat of primer on top of the remaining 3 layers of wallpaper, they began to gently slip off the wall and onto my roller. At first, in denial, I simply dismissed them and pressed the scraggly pieces back down, but it got worse and they no longer even needed the roller to pry themselves from the wall, they just began to leap from the wall, free at last, to my already sticky floor. No drop cloth. I would fire myself if I worked for me.I filled 6 trash bags full of smelly musty, quite possibly toxic, nasty old wallpaper from just ONE wall that week. I no longer felt like picking and did not even go near the remaining walls and hope I never will. I read  a decorator  blog once where the writer criticized do-it-yourselfers who leave the wallpaper on the walls as “lazy and irresponsible” and I have to say, “Get a life!” I got every single speck of wallpaper off that wall and it looks no better than the rest of them heavy with their 4 layers! I got down to horse hair popping through, had to spend hours plastering and  concealing saw the lathe underneath, and the end result is neither pure nor artistic. It is simply…done.Picky Picky Picky!                                                                   Bergman Gray 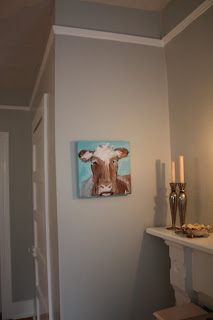