Hundred Dollar Bill – My Old Country House
Skip to content
— old country house blog —
For his seventh birthday, my youngest child asked for one thing and one thing only, a hundred dollar bill. I think what he said was, “All I want is a One Hundred dollar bill…and you can get me some hot wheels too if you want to wrap some stuff up.” So, being the baby, and essentially the only person on Earth to whom my husband is rendered incapable of saying “No”, Nine got his One hundred dollar bill. Perhaps one day he will show his own children the pictures we took, of him proudly displaying the crisp new Ben Franklin next to his toothless grin, smiling ear to ear and chubby cheek to chubby cheek. Hundred dollar bill in one hand, hot wheels in the other. He slept with both under his pillow well into his first week as a seven year old. 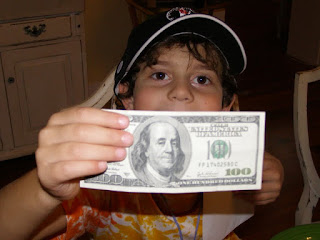 Two weeks into my baby’s seventh year, my Mother died. I remember crawling into my Moms bed with her, when she was dying, and telling her about the hundred dollar bill. I also told her that his absolute favorite gift actually was the bright blue bike with silver fenders that we gave him from her.  I had told her about it the day I bought it, but in her pain patch haze, she had forgotten our conversation, including the part about the bike or even that it was her youngest grandchild’s birthday. For the first time, since her diagnosis, 6 weeks before, she wept, no she sobbed, like a baby, she sobbed, she could not catch her breath”I am not supposed to forget his birthday! Grandmothers do NOT forget their Grandchildren’s  birthdays!!” She wept and wept I comforted her and said all the measley words I could string together to try to make is all go away. Looking back, I see that in that moment, that recognition that the world was indeed going on without her,  I think that in that moment, when she could no longer remember the things that made her life worth living, she loosened her tight grip on life and began to let go. She died one week later.
The penny wise seven year old banker held onto that hundred dollar bill for a solid year.  We took many trips to Target, and vacation shopping trips that would end in tears, when I would be accused of “robbing me! making me spend my hundred dollar bill!”. Somehow that year, he stayed rich and I went broke, insuring that his bill stayed intact and in his possession in the electronic safe that he changed the password on daily.
One day, as he was closing in on eight years old, he informed me, “Mom, I have decided what I want to buy with my Hundred dollar bill!” Thinking we were headed to Best Buy for a video game, I tried to remember if I had any coupons tucked away, when he said, “I want to go to the SPCA and buy myself a kitty.”Well,  I have never been able to walk out of the SPCA empty handed, and that was not going to change. So his kitty, Lucy Jane,  became our third cat, four if you count Fluffy, the cat that Eleven got for her fifth birthday and who has moved in with the quiet retired couple across the street. His new owners do things of which I am incapable, like nailing  scrub brushes to chair legs so that he can scratch himself. He is in a better place. 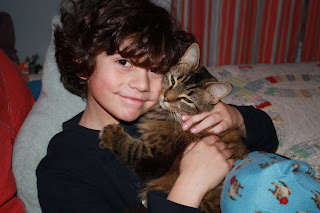 But Lucy Jane is Nines baby. Really all of ours. She is one of those petite cats, who never got much bigger than a teenage cat. She is a plain old “M” on the forehead brown tabby cat with flirty slanted green eyes, a white chin  and the barest  hint of a meow. She came to us sick, par for the course we have found, but we got her better, except for the gas and the periodic diarrhea. As it turns out she is allergic to fleas and  has IBS, Irritable Bowel syndrome, which in a cat, means wear your fast sneakers when she heads to the litter box so you can leap two stairs at a time and get to the box and scoop out her mess before the entire house smells like a septic tank explosion. Like really adorable bratty children, it is a blessing that Lucy is precious. Nine routinely carries her tucked under one arm,  and hot wheels in the other. He will crawl up onto the couch with her that way, bobbing around, he will shift himself, get a blanket, cozy himself up and she will not flinch. We like to say “she has no bones” because she is a stuffed animal in his arms, oblivious to the jerking and the tossing, just purring away, her face in the armpit of her best buddy.
So why am I telling you this story today? Because today I am just so sad. Lucy Jane, my little boys hundred dollar bill one year old sweet sweet never hurt anybody kitty is at the vet and she is dying. We went on vacation and when we got home she was terribly sick and we have been round the bend trying everything, steroids and antibiotics and iron and special food and she is not getting better. Last night, I woke up in the middle of the night, panicked that she had died, and slept the rest of the night with her on my chest. I wrapped her in a towel and she did not even have the strength to try to crawl away. I took her to the vet this morning and I had to leave her there, so they could do some testing, but they said “Things do not look good,” and I have been immobilized by grief all day. I tried to work out, do something to distract myself, but everything feels stupid when our kitty is dying. I keep thinking that I have to be the Mom, I have to be the strong one. This is the nearly impossible part of being a parent. Putting on a brave face when your heart is broken. I know I can do it, I did it for the whole year after my Mom died, comforted them ,slept with them, cried with them…so I know I can do it. I just don’t want to. I do not want to have to tell my little boy that his Lucy Jane is going to die. I thought it would maybe happen when he was at college. Not one year later in third grade. It just sucks, as he would say, it just sucks! 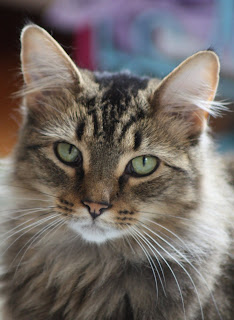 PART 2 (written July 2012)
A few weeks after Lucy died, Cooper told me was ready to get a new kitty.
We went back to the SPCA and upon hearing the story of LUCY,
they offered Cooper any Kitty he wanted… on the house.
He looked and looked and finally found a BIG FAT BOY CAT,
who they had named “LUTHER”
sitting on top of his BIG FAT brother cat “LANCE”
and on the cage it said
“We are very shy, but just give us time.”
Cooper fell in LOVE with Luther and just had to have HIM.
He looked just like LUCY, but a full grown LUCY, so we knew,
since he was still a kitten,
that he would be a bruiser.
We brought home “TIGER”and he proceeded to spend every single day under Cooper’s bed.
We kept the food and water and litter box in his room….for Months.
Finally, it was Christmas day, we were all downstairs in the living room
and I saw out of the corner of my eye a tail go by.
I said, very slowly and very quietly…
“NO body, move…but I think Tiger has come down to say “Hello”.
It was a Christmas Miracle!!!
It was still slow going, but now a few years later..he is an outgoing, loving, put his paws on your face to say “YOU ARE BEAUTIFUL”
Dog kind of Cat, who is everyone’s favorite. 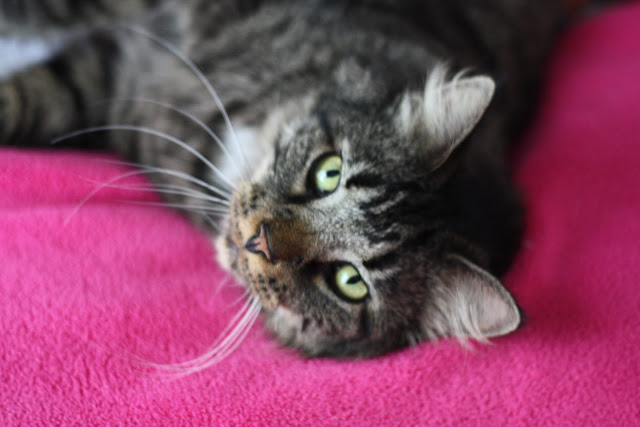 We think he might be part Maine Coon or something BIG.
He is sweet and so….the story has a happy ending….
PS-after taking Luther from his brother I felt so bad that I went back to see if he was still there, to bring him home and maybe help Tiger adjust. But he had been adopted. It was the way it was supposed to be.