I HAVE ALWAYS SHIED AWAY FROM POLITICAL DISCUSSIONS.

Partly because I tend to shy away from conflict and hot button topics and partly because I felt uneducated on politics and truth be told do not like speaking about things I know nothing about. I have tried to educate myself over the years…but I think I still lag behind.

So Thursday when I got a Train ticket to Washington DC to join the Women’s March it was like I was having an out-of-body experience. I kept thinking “Who is this person that feels so compelled to go?” But I had to go. I had not even considered going until that day…but a force of some kind was pulling me in.

I went alone and I went in cold. I honestly had no real idea what I would be walking into ,but I knew it was important, at age 58, to no longer be afraid . I did not have a pink hat, or a sign.

Ironically, I met at the train station, a group of women, not only from my town, but from my street…actual neighbors! They gave me a hat and I had my tribe to hang with. It felt so good to be so welcomed.

I did not vote for President Trump but I have not voted for half of the presidents in my voting lifetime, and still I have ALWAYS respected the office.  I raised my children to do the same. The President of the United States. It is a high honor, the highest. I will not debate here about President Trump’s merits or faults … the fact is – he IS our President. I will not fall into despair – in fact  I am still hopeful. It is the ONLY way I know how to be.

The MARCH, in many ways was awe-inspiring. To see so many thousands upon thousands of people come together for a common cause was breath-taking. The mood was inclusive and upbeat and connected. Men, women and children – together – to have their voices heard.

it was a powerful experience. 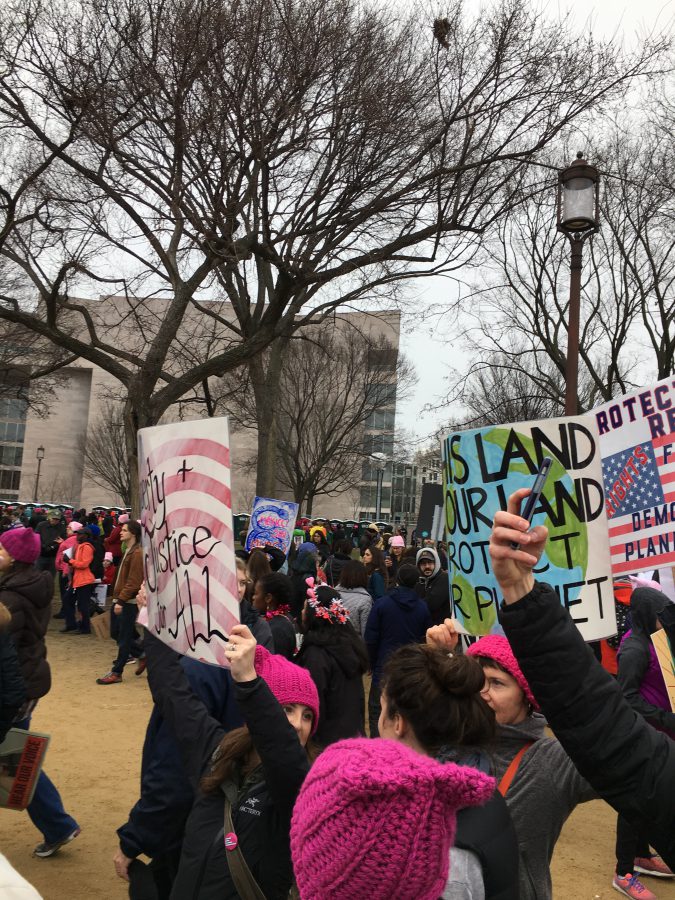 But, as I have processed the event, and read the news and social media … it has made me so sad.  To see, not a better world – but actually MORE name calling, MORE of a divide than ever…I was heartbroken to see that women who chose not to MARCH – were being made to feel bad…have been called a “disgrace” , or “weak”, or “uninspired”.  Really? What have we become? What happened to live and let live? Have I had my head in the clouds? Were we always this mean to those who see things differently? Wouldn’t it be SO much better to sit down with the people you LEAST understand and TRY to understand them??? We all might learn something.

My whole life I have known that half of the people I know and love are voting differently than me, held opposing opinions but that has never made us HATE or be so HATEful to each other ? What is that all about? It is Social media? Is the a group mentality thing? Why? This kept me awake ALL last night. I wondered “Did I SOMEHOW become part of the problem – not a solution, by choosing to March?” Am I really making any difference? I  want my Country to be a place where people can live together peacefully regardless of race or religion or political stance. Did this achieve that?

I honestly have no answer. I am not a fighter. I just want US to be as good as we CAN be. I am afraid the we may all be missing the mark. So here are the steps I am taking: