I started blogging in 2009, a few years after my Mom passed away, as a way to write down the thoughts which bounced around in my head. So that I would not forget the moments which were happening all too fast…I never dreamed mine would become a Home and DIY and Design Blog…or that my painting would be as successful as it has. I just wanted to freeze time.

“I was cleaning out my “Draggydandy” blog today,

…looking through old posts, some that I never finished and ones I finished, but had never posted.

This one was written over a year ago (2010),  but could have been written yesterday…

“He paused today, when I dropped them both off at Middle school, and turned and looked at his sister and gave her a soft pat on the head. She gave him a pat back. And for the first time maybe all year, he waited for her to gather the 6 bags of stuff and her backpack and book binders and the random pieces of clothing that usually render her 10 paces behind him, but today he waited, and even helped her gather up her belongings and they walked in to school together. Side by side. And I could tell by their body language that they almost wanted to hold hands like they used to when they were little, holding hands in the store or walking down the sidewalk, in fact, there was a time when it was unusual for them NOT to hold hands. And I could tell that for a flash , just an invisible fleeting  moment they were connected like the two babies, 21 months apart that they are and that they truly do love each other and that one day when I am long gone they will have each other to bounce life off of. In that moment, only one thought just one thought went through my mind,

‘You have not wasted your time.’ “ 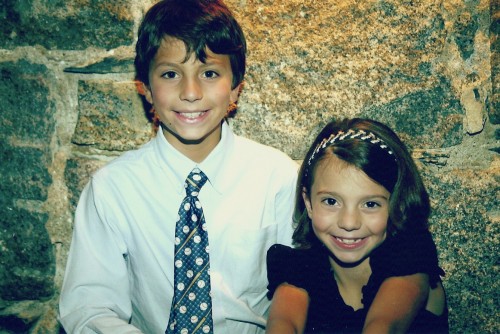 4 thoughts on “THEN AND NOW…now and then”