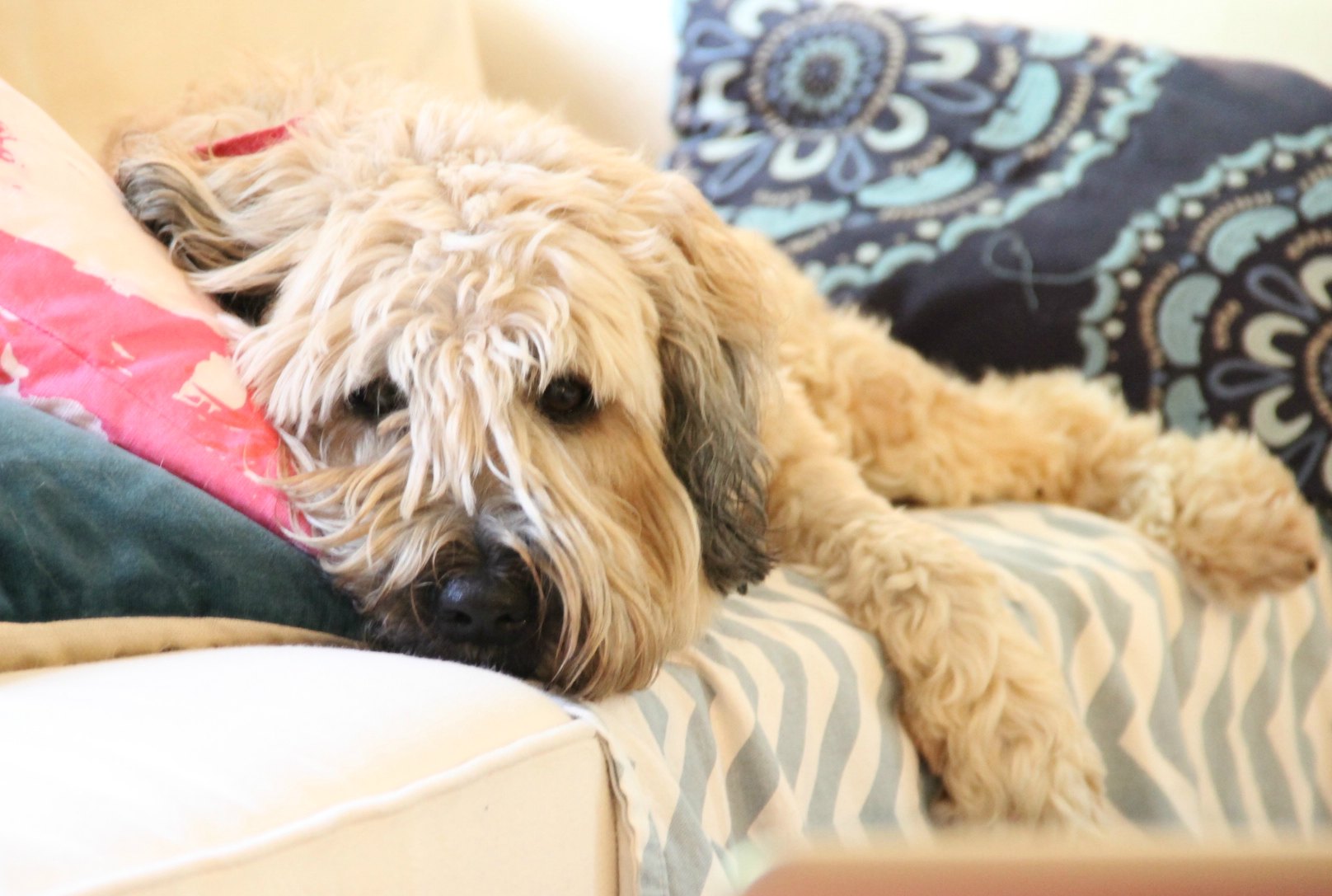 Of all the many dogs I have had in my lifetime  – I have had our Wheaten Terrier, MUFFIN, the longest.

Muffin is 12 1/2.  We got our little fur ball when she was just a few months old. At the time in 2005, my brother had a Wheaten terrier who we were all nuts about, named Nikko.  Dash our 1-year-old SPCA puppy was in need of a companion. I looked online and found a breeder in Missouri.   We bought her…from what I later realized was probably a Puppy Mill…which makes me a bit sad, but she has been ALL happy-go-lucky energy since the day we brought her home.

Our girl Muffin beats to her own drummer. She eats like a truck driver and burps like a frat boy all while looking like a Princess.

…and we just found out that she has cancer.

I noticed some swollen glands on her neck last week when I was giving her a bath. They did a biopsy..and she has Lymphoma. There are things we COULD do, things like Chemo and such, but at 12 1/2, and pretty sick already…we chose not to go that route. We have started her on steroids to reduce the swelling and give her some relief. I am feeding her boiled chicken and rice (knocking the other two dogs noses WAY out of joint!!!) and giving her lots and lots of snuggles and love and making the most of whatever time she has left. But it feels surreal.

I still remember the day we got Muffin –  like it was yesterday. Because she was coming from Missouri, she was flown to Richmond which is an hour away. I drove down with Cooper (age 4) and Phoebe (age 6) in tow, so excited were we to meet our very own puppy . We were directed to baggage claim where they had a special area for Animal Transport. WE waited and waited and finally I could see an animal crate being brought down, but we could not see an animal IN the crate. We were worried something had happened to her in transit. But when we bent way down, we could see,  in the back of the crate, a tiny fluffy black puppy (their fur totally changes color) wagging her little tail.

We planned to call her “Sophie”, and in fact ,that is her name on her official “papers”. Phoebe held her in her lap on the way home and as we were driving she kept saying over and over…”Mommy I love her so much. I can’t believe she is OURS!!!!” Then she added….”But Mama, she is not a Sophie –  Mommy, she is just a Muffin!!!” and just like that – Sophie became “MUFFIN”

I believe that Muffin has had the best life a dog could have. She has had a family that loves her, two dog “brothers” to chase and play with and  keep her on her toes, 3 cats to harass and an endless parade of Thunderstorms to set straight…but I am still heartbroken that her time on Earth, with us may be coming to a close.

Bottom line, our pets just do not live long enough. It feels so unfair. But like I have also said, I believe that dogs make the absolute MOST of each minute, not wasting any time or regret, worry, grudges or  obsessions (except those dang tennis balls!) and thus their shorter time is ALL QUALITY.

still, there are so many dogs that don’t have what Muffin has and I wish I could help them all.

SO, please will you say a prayer for our Muffin. God keep her comfortable. And give us the strength to know when she is ready to cross the Rainbow Bridge, because I know, I will never ever be ready.

I love you Sweet Sweet Muffin.