A few days before Christmas I pulled myself out of my FLU stupor and off the sofa and went into town with Phoebe to do some Christmas shopping. …It felt GREAT to be in the thick of it…to feel the hustle and bustle and even the traffic did not rob me of my Christmas Spirit.

While we were in town, Phoebe and I decided to swing by the SPCA…a favorite place…to check up on a kitty cat friend of ours.  “Boomie”, aptly named because no matter what we did he kept coming back...showed up on our back porch, a few weeks before Thanksgiving.

We contemplated adding him to our menagerie, until he beat the crap out of our Wheaten Terrier and basically terrorized anyone NON human he encountered. 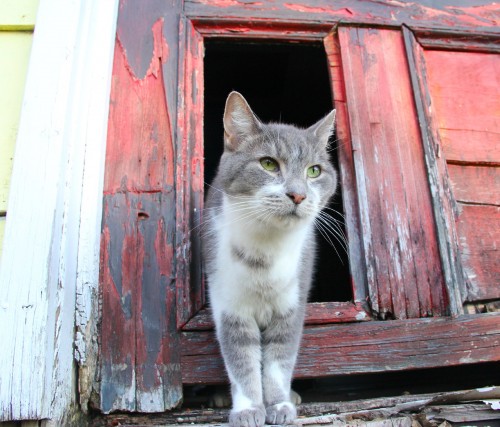 It was not a good fit…so after searching for his owner to no avail, we took him to the Charlottesville SPCA in hopes of finding him a good home.

… AS A side note and on the subject of cats…On December 7, our oldest Cat Felix died.

He had lived a good long life and he died under the boxwood bush right outside our front door… and was discovered by my upholsterer when he was delivering some furniture to the house. At first they thought he might be asleep…but then we found out differently. Cooper and I held a funeral and buried him under the Holly tree and next to Cooper’s kitty “Lucy”. We will Miss you Felix and your beautiful blue eyes.

…back to Christmas shopping and the SPCA….We found out when we got to the SPCA that “Boomie”, now named “Tyler”, was actually quite sick and still in the hospital part of the SPCA. Turned out he had a heart murmur and a seizure disorder and some other issues that they were treating him for. I was relieved that he was in good hands but sorry we could not see him. So, while we where there…….. Phoebe and I decided to poke around and check out kittens. I know what you are thinking…but there was NO WAY we were getting a cat…I had told that to Phoebe walking in.

Phoebe immediately spied a pair of ginger colored kittens, named “Baby” and “Pickle”. Baby hissed and spit and had no desire to be be held, but when Phoebe reached for Pickle, he melted in her arms. She held him for about 15 minutes and when it came time to put him back…Phoebe started to cry. “I don’t know why I am crying!” she said…”He is just so sweet”. She gave him a few more kisses and we headed home.

The tears did not stop and much like when you pull a loose thread on a sweater…the unraveling caught us all off guard. “Everything I love dies…I just want something to make me feel better…” and all of the tears that she had held onto, to be strong, to get through school and life…just kept on coming. She began to lobby and lobby hard for the kitten. We decided to sleep on it…(remember it is now the Sunday BEFORE Christmas) and the next morning , when I told Damon, “You know, I think we should just do this…” He replied..”I have already sent in the email application and put the kitten on hold.” Good Santa.

The next part was the hardest part…we had to make Phoebe think it was NOT going to happen to keep the surprise. In retrospect I suppose we could have just told her then and there…”Here … an early gift”…but we knew the surprise on Christmas morning would be worth it.

Phoebe really wanted to go back and visit Pickle on Monday. I knew that he would not be there and while my husband was certain this would tip her off…I knew that this would actually steer Phoebe off the path. What I was not prepared for, and broke my heart…. was how crushed she was seeing his empty cage and the tears and I truly felt like I was the cause of this pain that she did not deserve. Finally, driving in the car, with Phoebe sitting beside me staring out the window and tears streaming down her face..I said “Phoebe, …EVERYTHING is going to be okay.”

….and that was how we left it. She continued to lobby and claim we did not understand but I could take it now. “Maybe for your 16th Birthday!” …”   and     “This is just too late in the game Honey!”  I said what I needed to. We spent Christmas Eve taking shifts going across the street to check in on our baby, whom we were now keeping in our neighbors (who were out of town) bathroom…I always found him sleeping behind these tiny baskets where it was very warm. I wanted so badly to just tuck him in my jacket and carry him around all day…but I knew that the NEXT day…and for probably many days thereafter..his tiny feet would not touch the ground and he would get PLENTY of LOVING.

The boys kept asking and I had to convince them too that there would be NO kitten …” Please, don’t talk about the kitten anymore! It is making Phoebe SO upset…and it is NOT going to happen.” We went about our Christmas Eve tradition, Church, dinner, opening one gift (this year they opened the gifts they had gotten for each other with their own money which was very sweet) and of course reading “the Night before Christmas”…which with teens is an exercise in “how silly can I be” and then we sent them off to bed….

We went and got the kitten and I slept on the sofa with him tucked in my jacket….I must have slept deeply because I did not catch Santa!

I will let the Photos tell the rest of the story… 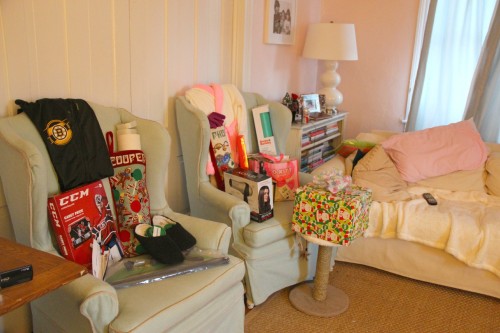 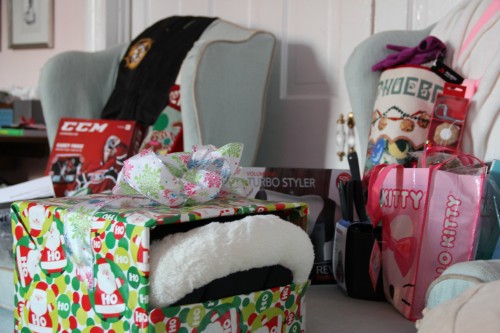 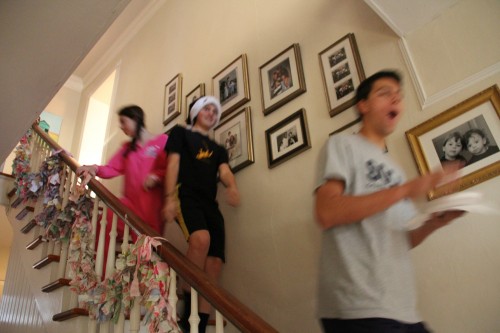 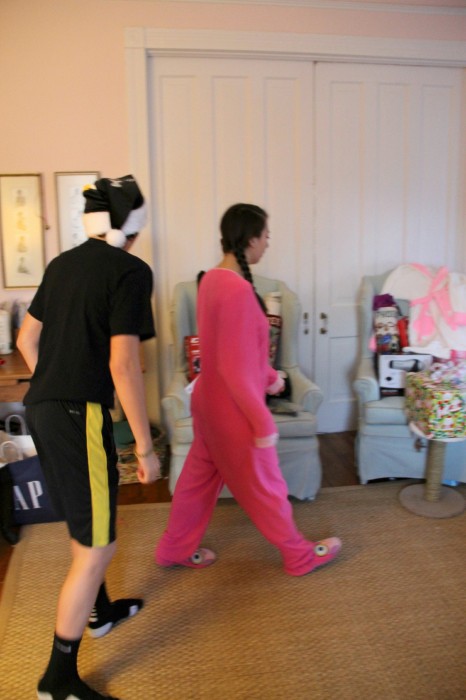 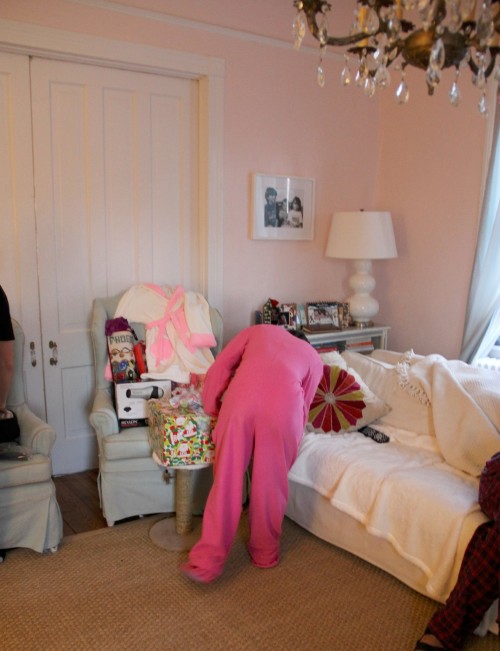 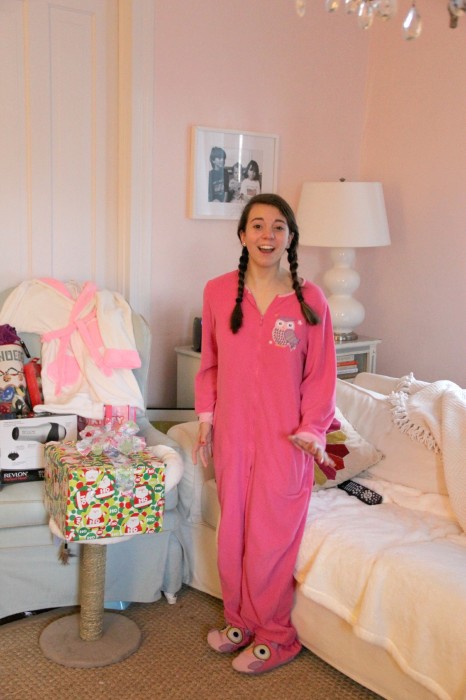 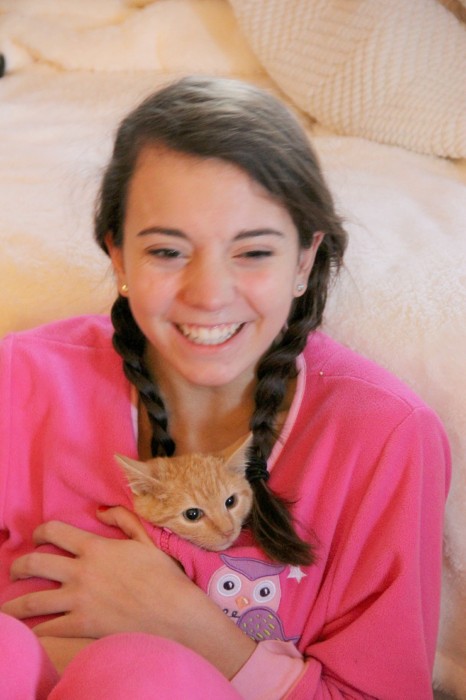 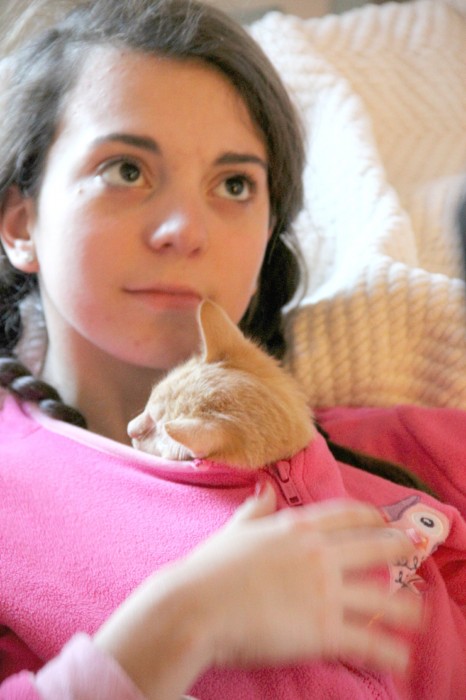 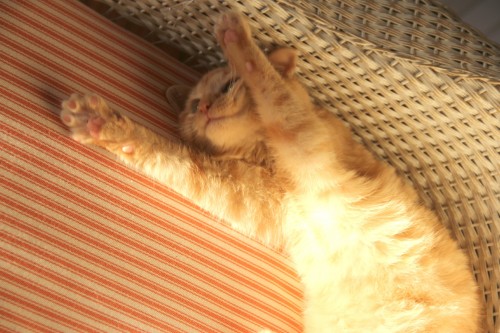 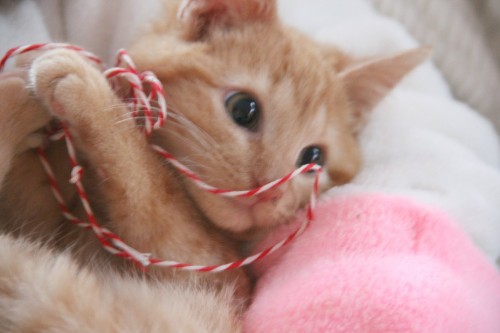 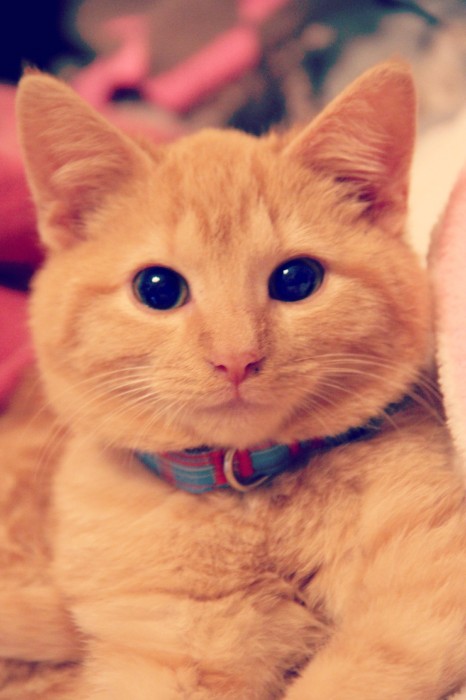 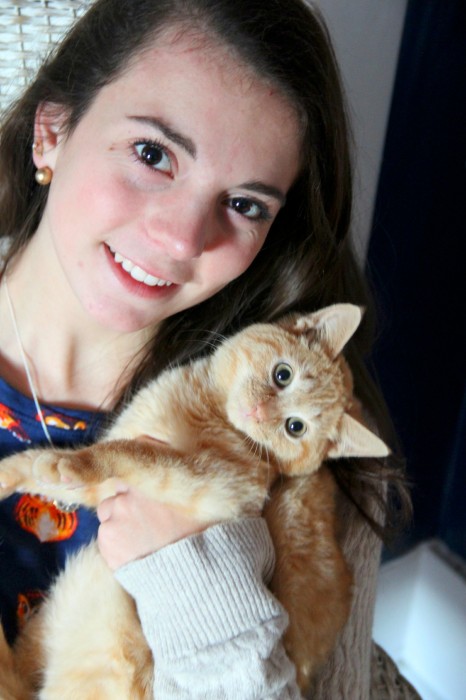 and they lived happily ever after…..

8 thoughts on “THE STORY OF GUS”