Last April, Phoebe and I took a trip to New York City for her 16th birthday. During our visit we went to the Katie Couric Show. That day, Katie had a number of guests, one of which was a guy who was showing the most recent in Cool “Pet gadgets”. On our way out, we each got a “Swag Bag” with each of the items demonstrated!

I lost my phone that night…so the photo above is the only one I have of that day..I had even taken a photo of Phoebe with Katie! Dang!!!

FAST FORWARD 8 months TO THE WEEKEND BEFORE CHRISTMAS

Having spent most of the Christmas hustle and Bustle on my bum recovering from Bunionectomy surgery and still missing my sweet Dash, Cooper and I decided to visit Pet Smart during a Christmas Target run. They were having a marathon Rescue Dog Adoption event and puppies were in abundance…. WE got our puppy fix and were on our way out but the entrance was jammed so we turned around to out the back way and stumbled upon a new litter of puppies which had just been placed in a pen. There were about 6-8  woolly babies, they all looked alike  – like collies puppies but with brown chocolate markings…very unique…so sweet and tempting but NOT what we needed. Out from user one of the Lassie babies crawls a tiny Beagle puppy, ears dragging the floor. (our very first “baby” was a Beagle girl named “Parker”) and I spontaneously said “Cooper, grab that baby Beagle!!!” He was a wiggly one but we got him…he was shaking and had the best puppy breath. As they say…”the rest is history”. We never put him back.

so, back to the Katie Couric swag bag. One of the items was a DNA Test, to find your Dogs DNA! We were pretty sure Bean was/is a Beagle, but just for fun we swabbed his cheek and sent one in. The results were FASCINATING!

SO AS IT TURNS OUT BEAN…who looks exactly like a BEAGLE on the OUTSIDE is actually 1/2 purebred BEAGLE and 1/2 COLLIE mix. The other woolly puppies WERE his litter mates! How crazy is that!!! He still has the Beagle ears and certainly the Beagle HOWL and the BEAGLE tendency toward being a scamp…but GENETICALLY he is mixed with Collie and who knows what else!

If you are curious about your Dogs DNA…go to HERE and ORDER YOUR TEST! 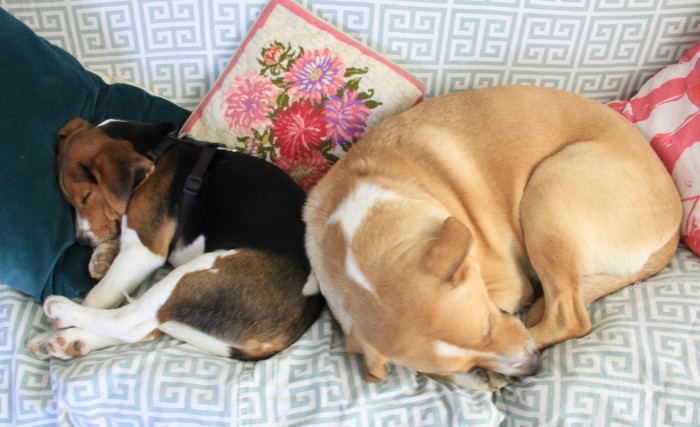 1 thought on “WISDOM PANEL – FINDING OUT YOUR DOGS DNA”