When I read Oscar’s story

I knew I had to paint him!

Oscar is an American Bulldog. 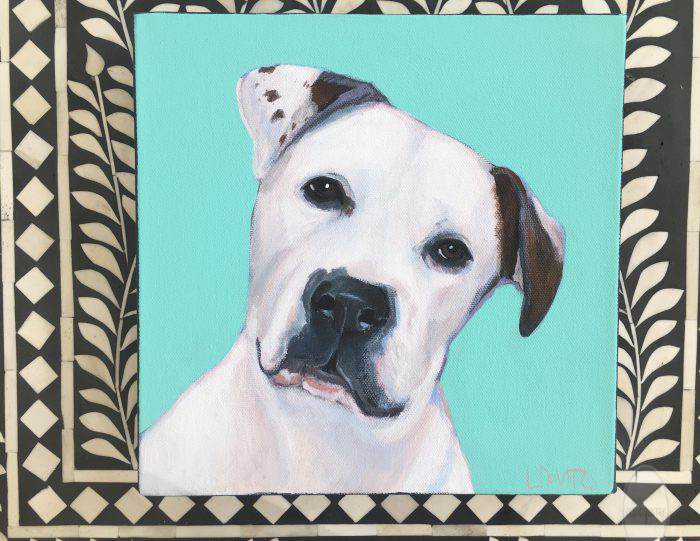 ” My American Bulldog Oscar,  recently turned 9. I rescued Oscar through the Animal Welfare Society in West Kennebunk, Maine. They told me he was a stray. I really feel like I hit the jackpot. He’s such a happy-go-lucky guy who loves people, other dogs, even cats. Once he’s inside, all he wants to do is snuggle on the couch, or s;eep on his back with all 4 paws up in the air.

I adopted him when I was a bachelor in my 20’s. And along the way he’s lived with me in Maine, New Hampshire and now Boston with my wife – who he might like more than me. He’s explored all over New York City, camped in Vermont and hiked Mount Washington. I really can’t imagine my life without him, he is my best friend!” 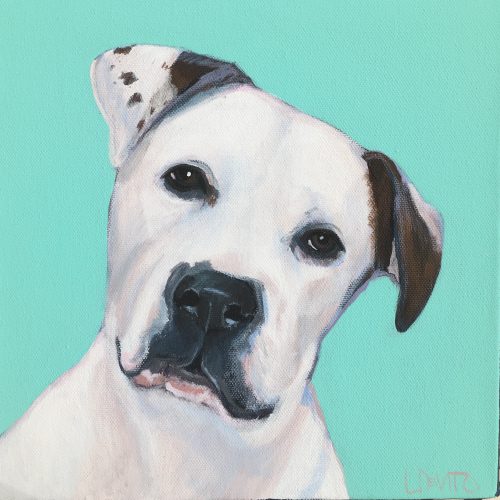 5 FUN FACTS ABOUT THE AMERICAN BULLDOG

4.  A variety of ear types are acceptable including cropped, rose, half-pricked and forward flap.

5. The coat is smooth and short, and comes in all shades of brindle including red brindle, varying degrees of white, red, brown, tan, fawn and piebald.

“No matter how close we are to another person, few human relationships are as free from strife, disagreement, and frustration as is the relationship you have with a good dog. Few human beings give of themselves to another as a dog gives of itself. I also suspect that we cherish dogs because their unblemished souls make us wish – consciously or unconsciously – that we were as innocent as they are, and make us yearn for a place where innocence is universal and where the meanness, the betrayals, and the cruelties of this world are unknown.”