A Day in the Life of a Tiger – My Old Country House
Skip to content
— old country house blog —
Today begins Spring Break!
Hip Hip Hooray! Now I can sit around the house! Wait, haven’t I been doing that for 5 weeks already with my sick little boy? Still, we have hit the pause button on the hustle and bustle and all of the kids are still sleeping in their beds. I love Spring break. What’s not to love!

My hubby, surprised us, no not with a flash Mob, but with plans to head to the Outer banks of North Carolina on Sunday. I am counting the minutes. The sun, the sand, the break will do us all good.

As I was sitting here for my usual quiet few minutes before the house wakes up, I looked across the room and saw Tiger, Cooper’s kitty, starting his day. Sitting in the window, surveying the view and contemplating his escape. 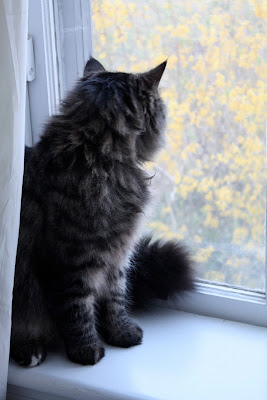 I fed the 3 cats and Tiger left the kitchen in disgust as the other two cats acted like pigs and nudged him out of the way. He knows that if he waits he will have the bowl all to himself.

When we got Tiger, he was named Luther. He was sitting square upon his brother Lance in a cage at the SPCA. He was beyond terrified and when we tried to take him out of the crate he straddled the door with his legs to keep us from pulling him out. But he looked like Coopers kitty who had just died (read this and this with a tissue in your hand) and Cooper wanted his kitty back or one that looked just like her. The SPCA gave him to us for free and he hid under Coopers bed for 2 months, and then mine for one. Finally, slowly but surely he began to trust us, and now he is the top cat of the house. He rules the roost.