Dryer Lint, Ocean Air and Silver Linings – My Old Country House
Skip to content
— old country house blog —
So, we found out a week ago, that the reason why my 10 year old, Cooper, has been so tired and cannot seem to kick this flu, is that he has Mono. Big fat bummer. Poor baby. So he and I have been spending a lot of time together and I have been home, and will be home with him, for a while.
The first few weeks he was home sick, were kind of nice (not the sick part) but the stopping my running around life part was a welcome break. I had a reason to say “No, I can’t do that.” and I curled up on the sofa with him, read books and blogs, watched lots of daytime TV and played many games of Connect Four, a game where he holds the National championship, I think.
But as the weeks have passed, I have gotten a bit stir crazy. Yet, how many times have I wished for a solid chunk of time to check off some of the house projects off my list? Now I have that time. And so that is what I have been doing.
The laundry room was not a planned project. It started when my 14 year old, in an effort to speed along the drying of his favorite soccer jacket, took the jacket sopping wet, before the spin cycle , out of he washer and put it in the dryer, with the sopping wet towels which were also in the washer, and subsequently pushed the dryer belt to it’s last notch until “pop!” it broke. So, I set about googling “how to change a dryer belt”, found a great video showing me how on You Tube, ordered by belt online (it got here in LESS than 24 hours and I did not even pay extra for faster shipping!) Cooper held the flashlight while I changed the belt, and Voila! I saved a bunch of money, and may also have saved our house from burning down.
You know how they always say “dryer lint is a big cause of house fires!”. Well, they do and I always heard that and thought, “well, I always clean out my lint tray so that will not be a problem for us.” I was in fact wrong. When the dryer was pulled apart, I found that beyond the lint tray is a big hollow area where hot air goes out the vent to the outside. THAT area fils up with extra lint that the filter does not catch, especially if the end of your dryer vent  to the outside is not a straight shot, but rather a long winding crinkled smashed tube, as ours was. What I found out is that the best and safest way for your vent to be is directly hooked up to the outside, and if that is not possible, then you need to go in periodically and clean out that space. I kid you not when I tell you that there was SO MUCH lint in my “space” that I could have stuffed a taxidermy beagle. Scary. But I learned something and now you know too! Ironically, when I moved the dryer over, low and behold, the vent to the outside, lines up EXACTLY with the vent from the dryer, as if they planned it that way, and in fact, I think they did!

So I fixed the dryer. But then the laundry room was a pit. It is truly just a dumping ground for dirty clothes and we have a door on the room so usually, what I don’t see, I don’t care about. But then the March Issue of Country Living came along with the cover story about Stray Dog Designs founders Jane and Billy Pritchard and I was mesmerized by their hallway with the horizontal stripes.

I knew that I could not pull off our 10 x 30 upstairs hall but I could do our teeny laundry room. And so I did!!!
The colors I used are for the doors is Benjamin Moore Fairy Tale Blue 2055-50 and for the stripes are Benjamin Moore Ocean Air 2123-50 and Mountain Peak White OC 121, which by the way, was a quart I had leftover from when I chose my Kitchen cabinet white. (Now of course, I am in love with Mountain Peak White and contemplating doing the cabinets in THAT!)
The end result….you tell me!!! I want to move into my laundry room!!! I do not have a before picture handy but if you must have a frame of reference go into your kitchen, and open your trash can and look in. 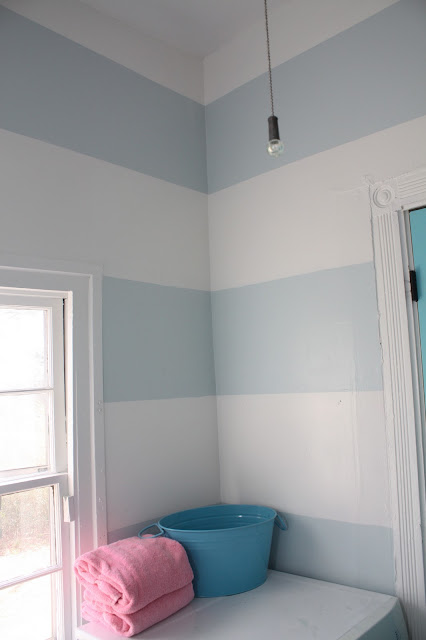 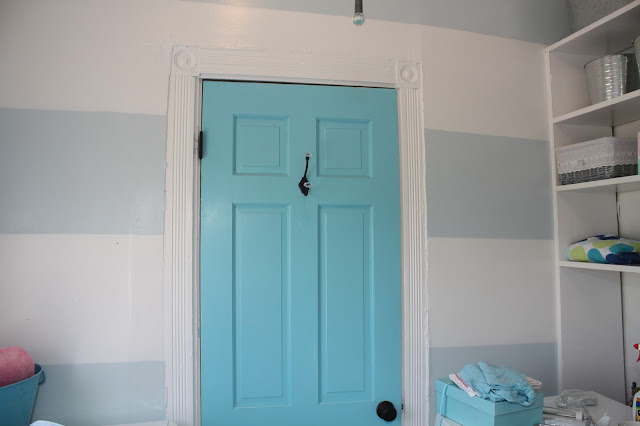 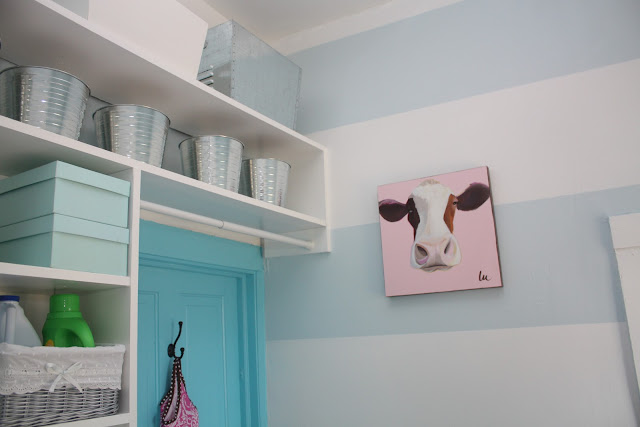 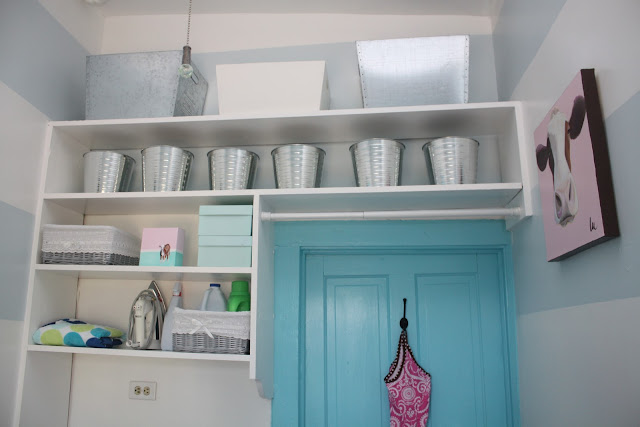 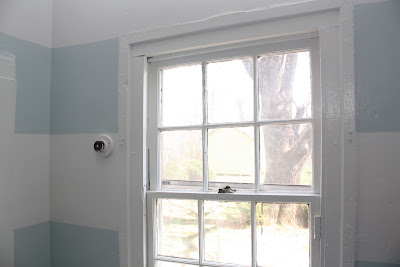 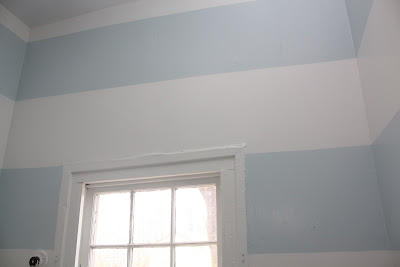 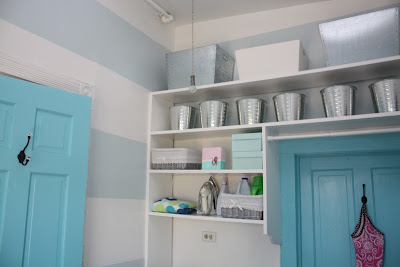 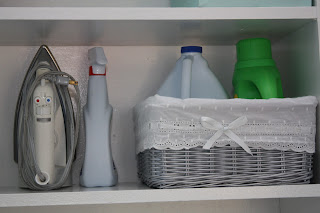