AS YOUR KIDS GROW AND CHANGE

SO DOES YOUR HOME…NOTHING IS ENGRAVED IN STONE…OR PAINT…furniture and colors are outgrown and worn through… Spaces evolve over time..It is a time to embrace the inevitable and an opportunity to try new things…new colors…new furniture arrangements.

And so, par for the course, during the nearly 10 years we have lived in this house.

THE BOYS ROOM…has undergone many changes…..lets take a look shall we……

The house has 3 bedrooms, all about the same size but one of the kids rooms has more windows and is a tad larger…and was to be the boys room. However,  on the day the rooms were painted…the painter reversed my instructions, painted the boys room pink and Phoebe’s room blue and thus the boys got the ever so slightly smaller and shadier room. The door you see below goes directly into Phoebe’s room…much to her chagrin. 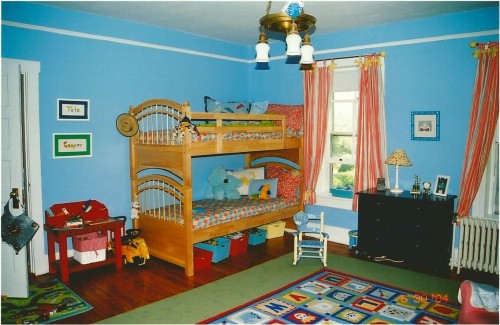 They shared a room and bunk beds…Cooper on the bottom, but quite often, one of them slept with the other or between us in our big king sized bed. The room was where they sometimes slept, but always where they played..and played and played…trucks, trains, legos…beenie babies, playmobil , hot wheels, hundreds of hot wheels…this room offered them space and comfort…it was perfect!

…over time, there were subtle changes…they wanted the beds UN BUNKED…

but essentially…not much changed and they grew..Cooper started 1st grade in 2007. 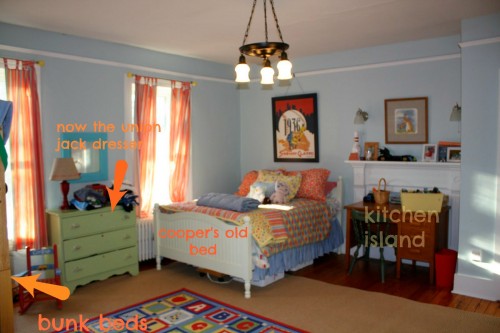 BOYS ROOM CIRCA 2007..the living room rug now lives in their room…

Tate slept in the bunk beds and Cooper used this double bed. With LOTS of bribery (boys do not like change in their rooms) I convinced them to let me lighten the color a bit and their room was painted a soft blue Benjamin Moore color called “Harbor Haze”. They still played lots of Legos and Trucks and floor space was a  still a HUGE premium.

In 2010, Tate was in middle school and wanted to try it on his own.

We converted the old sleeping porch into a bedroom..and Cooper had this BIG room all to himself…WE SOLD THE bunk beds and I bartered some Decorating work for a beautiful Pottery Barn Kids Bead board double bed! Cooper chose a deep but warm blue by Benjamin Moore  called “Poolside”..NOT to be confused with “Poolside Blue” which is more of a bright aqua like the arrows in the above photo.

Tate tired of the less than perfect conditions of the sleeping porch…slanted floor, no heat or air conditioner and while we supplied him with both a heater and an air conditioner he decided to move back in with his bro…we gave him my Moms old bed, which I upholstered and in the meantime Cooper had changed to Phoebe’s old bed…after she got the twin set and the side rail on his Pottery Barn Bed bed broke ……..probably from doubling as a trampoline…. 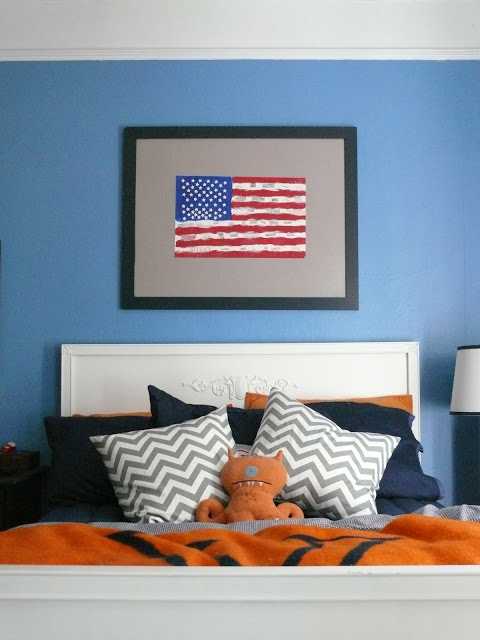 …and this is where we are…well, WERE until a few weeks ago when the room underwent yet another subtle but oh so productive transformation!!!

Come back tomorrow for the Monday Makeover and exciting news about a Pet Portrait Giveaway!!!

Thanks for joining on the trip down memory lane!!!!

7 thoughts on “GROWING UP WITH THE BOYS ROOM”