I am writing this post on the plane, enroute to Los Angeles for the Design Bloggers Conference…

Seated Directly behind me is Lisa Mende…of :

we figured out we were on the same flight last week…! back in January she gave me the necessary “You should DO IT!!!” to get me on board and I have been counting the days ever since.

More on all of that later….

I promised you a REVEAL of the Kids Bathroom..and then forgot to take photos however, lucky for you I have some on my iphone. I will show them to you…as a tease…and then when I return I will show you the REAL Photos!!!!

I am proud to say that the kids actually hung their towels up there without my scolding. I got each of them  3 sets of towels in a unique color. Phoebe chose pink, Tate chose the Cream color and Cooper got a Soft Gray. The deal is, the towels can be hung anywhere but on the floor. If I find them on the floor, they become mine. And eventually they will have to beg borrow or steal to dry their little or big as the case may be…selves!!! It has only been a few days, but they seem to be doing better. This view is unfortunately now obscured by the door and can only be seen when you are IN the bathroom with the door closed.  I toy with the idea of removing the door and replacing it in a trolley outside the room…but I am not sure if the proper amount of privacy would be offered and with almost 3 teens…PRIVACY is Golden.

I went with The Martha Stewart Seal Harbor Vanities from Home Depot. They were interesting enough without breaking the bank and compliment the floor and wall color . I am almost done with the tile back splash…in fact was working on it at 9pm last night…

I finally chose for the wall color. “OCEAN AIR” Hey! when it works..it works. This you may remember is the color of the stripes in our laundry room. The ceiling is one shade lighter…a Benjamin Moore color called “SEA FOAM, which is soothing.

The Faucets are by Belle Foret which I got from VintageTub.com

I got pretty jazzed about the sconces….

The floor is the same Hex tile I used in the Powder room, an unglazed antiqued color, they look like they were always here, which was my goal. I have to say, I am in love with the kids bathroom. I strayed a bit from my artsy DIY self and just got much of it out of the box, but it works. Its new and fresh, they are over the moon in love with the shower (photos when I get home) that does not have the unweildy curtain that the clawfoot shower did). The kids needed more primping space, two kids can be in there getting their teeth brushed…, doing their hair, slapping on the gallons of AXE etc.

I kind of can’t believe that we have NEVER had a bathroom for our three kids like this, but such is life, we did fine and now we are even better!

I am so excited, although to be honest, right now I could be going just about anywhere and be excited. I spent the better part of yesterday prepping for the guys who are coming to replace all the upstairs ceilings…and that was about enough to send me packing. We had to relocate all of the involved rooms of furniture which would not have been THAT big of a deal except the rooms to which they were being relocated had been sorely neglected and pile high already with stuff stuff stuff. My husband filled two giant trashcans and took two car loads to our local Goodwill-like store that actually DOES give 90% of the money to charity. By midnight…the rooms were relocated, the halls were lined with cardboard to protect the floors, I was packed…and I slept for 3 1/2 hours and then left for the airport at 4:00am. 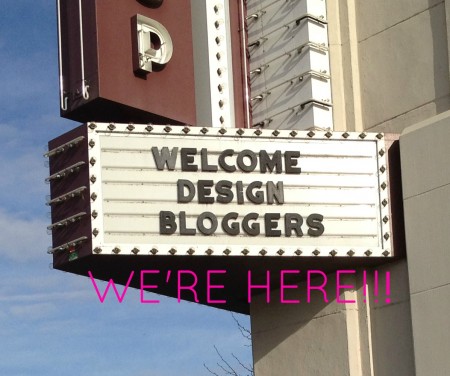 While I am in LA…I really do LOVE saying that, I will keep you updated on the things I see and hear and do. We start today with a cocktail party with the cute guys from Million Dollar Decorators – Jeffery Marks and Ross (last name?).I seriously hope I don’t look too much like the girl who does not get out much, in my itchy new clothes…and shiny shoes…I plan on being a changed person on the return flight home. I even have plans to catch up with a few of my College Buddies!!!