Never fails. Kind of a Murphy’s Law with My Old House, as soon as I feel it is safe to dip into the savings to do something “cosmetic” (and I am referring to updating a 1967 Kitchen as cosmetic), something, really big, goes wrong.
Case in point. the ceiling. Well, the roof, which has a leak (or 5) and consequently water pours in with each rain  and therefore the ceiling is now showing signs of water damage and err to fore  has holes where I have had to drill to let the water POUR in!!! Arrgggghhhhhhh!!!! Swear word! swear word!
We have had something like 10 inches of rain in the last month, maybe more, and this Old roof is leaking like a sieve. The roof guy has been out to “repair” the roof at least 6 times in the last month. He came by last week and felt like he had solved the mystery, patched the holes. He even showed me pictures of the holes he found on his cell phone. But the rains came, and, like an unwelcome guest, so did the water. I saw the roof guy at the hardware store this morning, when I went to get plaster and caulk to repair what I am about to tell you about, and when I told him the roof leaked again, I swear to God he looked like he might cry.  I know I have. 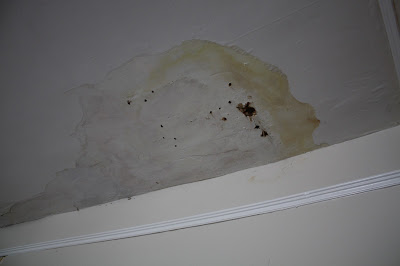 So the plaster. With water pouring in the ceiling and down the walls, the wallpaper has slowly loosened itself from the wall and yesterday, it all came down. It started like it usually does, I pulled one small piece of wallpaper and two hours later I was on a ladder scraping off the higher parts. 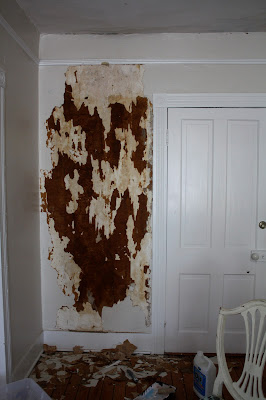 I finally got it done, and the wall is now down to the horse hair plaster. The trash can full of 4 layers of old smelly moldy wall paper is out, the floor is mopped and I will be doing some patching this week.
As if…swear word ! swear word~
Never a dull moment. 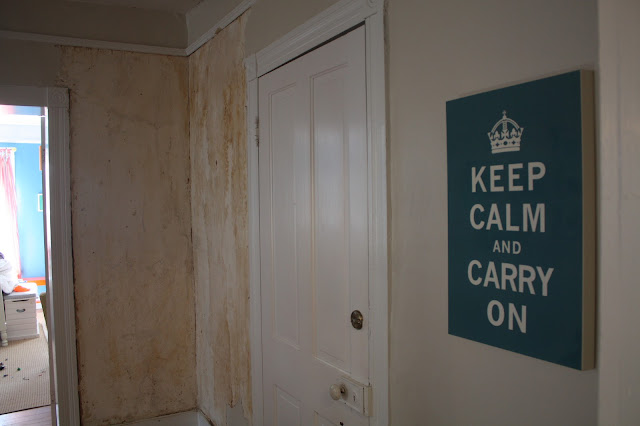 Keep Calm and Carry On!